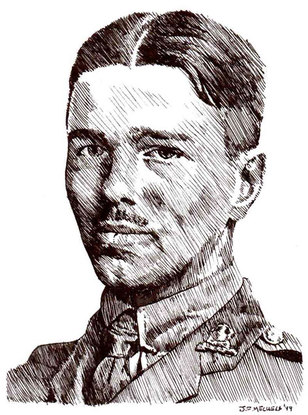 Portrait by James Mitchell from a photograph of Wilfred Owen,
then an officer cadet, July 1916.

The author, Wilfred Owen, has not only been recognized for his poems, but has been hailed the ‘greatest English poet of the First World War’ (David Roberts, the War Poetry Website, 2012). The realism and strong imagery in his poems are manifested from direct, personal experiences of war. His writing strikes an emotional chord in the reader by evoking a sense of intense reality and the sensation that the reader was actually there.

After feeling somewhat guilty for not actively serving his country, Owen signed up to join the army and therefore a life full of traumatic physical, psychological and moral torture. According to David Roberts he had experienced been blown up, concussed, endured shell-shock, gas attacks and the stench of rotting corpses. Despite being such a painful time in his life, it did, however, give his poems a unrivalled edge.

His story is corroborated by a letter he wrote to his mother, "I can see no excuse for deceiving you about these last four days. I have suffered seventh hell. – I have not been at the front. – I have been in front of it. – I held an advanced post, that is, a "dug-out" in the middle of No Man's Land. We had a march of three miles over shelled road, then nearly three along a flooded trench. After that we came to where the trenches had been blown flat out and had to go over the top.”

Alexander Kimel is a Holocaust survivor who was amidst the horror of the time. The events of the Natzi Holocaust shocked and terrified the whole world. Not only was it a horrific time in history, but it will stay with it’s survivors forever. Alexander Kimel is no exception. It is clear to any reader of his poems that he has been traumatized by the experience and feels very passionately about the topic. His life started out in a town called Podhjace in Western Ukraine, but after the Red Army seized his hometown and threw his family out of their house, they had no choice but to flee to the ghetto, where he grew up. According to Memories of World War II (2011), ‘In 1942, 7200 Jews from his ghetto were shot and gassed.’ As a result, in the next year, Kimel fled to the surrounding forest and villages. One month later, the ghetto was liquidated and every Jew in the locality was shot dead, but Kimel survived. In accordance to information regarding the rest of Kimel’s life, there is little to no formative material. The only evidence of Kimel’s experiences after fleeing the ghetto are the very vivid poems that are so concise that they could only be written from personal experience.


For Alexander Kimel's recount of the shocking events of the raids at the ghetto visit http://www.adl.org/children_holocaust/story_first_kaddish.asp